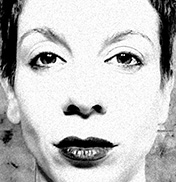 Dimitra Charalampous graduated in 2001 from the Greek National School of Dance (KSOT) and the same year she joined the National Theatre of Northern Greece under the artistic direction of Konstadinos Rigos, with whom she worked until March 2007. During these years she participated in more than ten plays and went on tour with most of them in Greece and abroad. In August 2007 she moved to Bonn-Germany and joined the Johann Kresnik company at the state theatre of Bonn; in August 2008 she worked for the state theatre of Darmstadt with the artistic director Mei Hong Lin.

In 2009 Dimitra returned to Athens and started teaching movement in dance and acting schools, while at the same time she participated in different happenings, events, experimental videos, operas, and movies. She currently works with dancers and actors as a teacher or choreographer. In June 2018 she completed the classical method of Pilates mat (Advanced mat teacher) program of Power Pilates. Dimitra continues her studies on Pilates reformer under the supervision of Evgenia Papadopoulou (Corpus Ray).