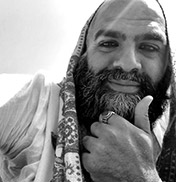 Xerxes has an interdisciplinary background in eastern & western psychology and mysticism, traditional oriental medicine, social sciences, and strategy & organizational development. He was born in Tehran in September 1978 but grew up in Vienna. During his studies of philosophy, politics and economics in England, where he first came into contact with Eastern philosophy and meditation. After his studies he became a management consultant and soon realized that he was more interested in the field of psychology and alternative healing methods.

When he was 28 years old, he undertook a two-year journey and worked as a „Barefoot Doctor“ in Thailand, Sri Lanka, India, Nepal, Iran and the USA. During this time, he completed a number of retreats, including retreats in the ashrams of Osho, Sai Baba, Amma and Goenka. One of the most influential moments during his journey was when he received a scholarship to attend a retreat and workshop with Stanislav Grof and Jack Kornfield. This led him to dive deeply into non-substantial altered states of consciousness and begin a four-year training in Transpersonal Psychology and Holotropic Breathwork.

In 2008 he returned to Vienna and to work there as a meditation teacher, coach, consultant and facilitator of breath work and systemic constellation work. During the last 20 years he learned various methods from several internationally renowned teachers, including: Stanislav Grof, Sylvester Walch – Holotropic Breathing Bert Hellinger, Daan van Kampenhout, Matthias Varga von Kibéd – Systemic constellation work Achim Eckert – Meditation, Taoism, Traditional Chinese Medicine Albert Berenberg – Hypnotherapy Today he is based in Vienna and Athens and works as a futurist, public speaker and facilitator of self-development processes.