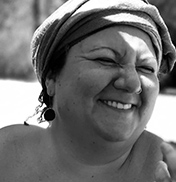 Gogo was born in Lamia in June 1980, left at 19 for Athens’s sake, moved to Montpellier for a couple of years, and then returned back. She has studied translation (Greece, U.K, France) specializing in children’s literature which she particularly loves, and translates medical and pharmaceutical texts out of which she makes a living.

She and yoga first met when, out of pure curiosity and for fun, she tried Aerial Yoga. After bursting into tears during savasana for no apparent reason, she felt that “something weird is going on here” and decided to do it again. She hasn’t stopped since. She has been practicing Hatha and Vinyasa Yoga for the past six years and tries in her power to overcome the various obstacles that her own body poses.

Although she does not believe in owning Certificates that much, she certainly believes in the knowledge provided by education: Gogo is a certified Yoga teacher (200 RYT Yoga Alliance) from Namaha Yoga School with teachers Jonni-Lyn Friel and Todd Tesen (2017), as well as a Thai massage certification holder (ITM Level 1 & 2) with teachers George Androulakis and Thalia Ragkousi (2018).

The way she approaches yoga teaching stems largely from the difficulties she encounters in her own practice, from the occasional frustration caused by obstacles she has to overcome in comparison to “easier” bodies, from her innate quality of taking care of people around her. Her original source of inspiration was overweight people who feel uncomfortable practicing yoga, who feel inadequate, and who, in the end, often never do so. She also felt that this concerns many people whose body image has been hampered by various prejudices.

Should there be just one thing she’d like to tell to her students (and often to herself) that would be: “Try, do what you can and don’t get mad at your body.” Oh, and “let go during savannah”!