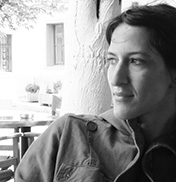 Marianna was born and raised in Athens. She attended classical ballet lessons from a very young age, and at the age of 16 she began contemporary dance lessons. Her contact with the art of dance continued during her university education at the Department of Product and Systems Design of the University of the Aegean in Syros. In particular, she participated in the performances of the then newly established group of contemporary dance Akropoditi, based in Ermoupolis, Syros. Her return to Athens intensified her involvement with contemporary dance, and she attended courses and seminars with more prominent Greek dance groups, like SineQuaNon, Dalika, Yelp, David Zambrano and improvisation with Julyen Hamilton.

Expression through physical movement helped Marianna develop an important part of her perception regarding the abilities of the human body. Contact with Hatha Yoga has been gradual, while the time needed for it to be established in her daily routine was basically the starting point for her deeper involvement what the term Yoga implies.

She obtained her Hatha Yoga diploma after attending the Vidhia Dham Yoga School training program in Nashik, India. During her study there, besides the forms of physical exercise which are part of traditional yoga, there were meditation classes, Yoga Nidra, as well as Pranayama and Cleansing Techniques. In her nearly six-month stay in India, Marianna visited several places where she attended Iyengar Techniques in Pune and Hatha Yoga in Varanasi and Rishikesh, respectively.